Pretty much the same things in these days of Anthropogenic Global Warming.

Female-named storms have historically killed more because people neither consider them as risky nor take the same precautions, the study published in the Proceedings of the National Academy of Sciences concludes. Researchers at the University of Illinois and Arizona State University examined six decades of hurricane death rates according to gender, spanning 1950 and 2012. Of the 47 most damaging hurricanes, the female-named hurricanes produced an average of 45 deaths compared to 23 deaths in male-named storms, or almost double the number of fatalities. (The study excluded Katrina and Audrey, outlier storms that would skew the model).

I pondered the authors’ analysis for about 15 seconds. “Bullsh*t,” I thoughtfully concluded. And after about 15 minutes on The Google™, I found the following facts to reinforce my skepticism.

Then, there’s this graph at wattsupwiththat.com: 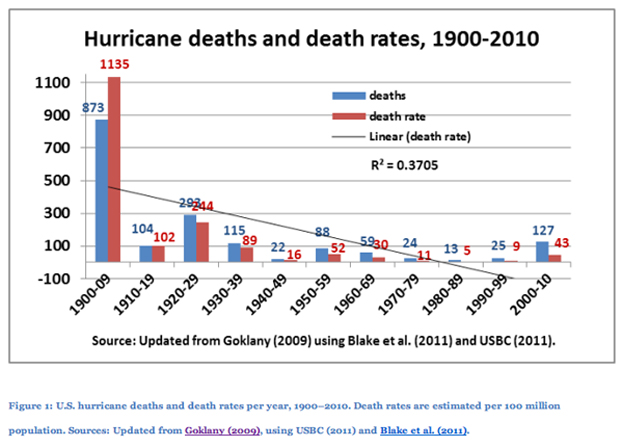 Note that there were (roughly) 1710 hurricane deaths (avg 57 per year) in the three decades 1950-79 when hurricane names were almost exclusively female. There were ~ 380 deaths (19 per year, a decrease of 66%) in the two full decades after the use of male names began. As for the final decade, two storms (Katrina and Rita, 2005) accounted for the vast majority of deaths. Rita followed a mere month after Katrina (~1,100 deaths), and no one would be foolish enough to contend that Rita was not taken seriously. (Rita alone killed 119. In one accident, 24 senior citizens lost their lives on a bus. During an evacuation.)

[Update #1: Hurricane Audrey (1957, 416 deaths, presumably a Cat-4 based on 147 mph winds) deserves mention. Taking it out of the above calculation, there were still 43 deaths per year 1950-79, vs. 19 1980-99. Wikipedia: “Audrey killed at least 416 people, the majority of which were in Cameron Parish Louisiana, though the final death total may never be known.” Today, with better communication, better infrastructure, better emergency response and more public awareness the death total certainly would have been much less. This is the most glaring example of how much things have changed over the last 60 years. – Ed.]

[Update #2: I emailed the authors of the paper, stating my skepticism and asking if they had considered items 1-3 above. I received a polite response assuring me that they had. The author was kind enough to furnish me with a copy of the paper, along with a spreadsheet of their database. I still find the study fraught with problems.

MFI is the “perceived masculinity-femininity of hurricane names” on a 1 to 11 scale, so that a 3 is “relatively masculine” and 9 “relatively feminine”. The basis of the study is the masculine-feminine perceptions of nine “coders”.

To test their hypothesis about gender-bias, the authors performed six experiments, designed to test how strong the subjects’ perceptions of storm strength was based on name, how likely they would be to evacuate, etc. In all cases the subjects were either students at the University of Illinois at Champaign-Urbana (where the key authors are in the Departments of Business Administration, Psychology and something called “Women and Gender in Global Perspectives”), or anonymous online subjects at Amazon Mechanical Turk.

As a thirty-year resident of the Gulf Coast, and an equal-opportunity evacuee*, I posit that the test subjects’ answers are in no way representative of the behavior of actual hurricane “targets” during an actual storm.

A couple of other issues to point out:

As always, correlation is not causation. The observed effect has nothing to do with sexism and everything to do with ongoing advances in hurricane safety and quirky storm naming practices. And a little bit to do with random chance.

The study is pure politically-motivated crapola, pure and simple. The National Academy of Sciences should be ashamed.

This entry was posted in Climate, Environment, Louisiana and tagged Crapola, Hurricanes, Shinola. Bookmark the permalink.