Why Did Obama Open the Strategic Petroleum Reserve?

On Thursday, the Department of Energy announced a release of thirty million barrels of crude oil from the Strategic Petroleum Reserve, the nation’s stockpile supposedly set aside for emergency supply disruptions.

Washington, DC – U.S. Energy Secretary Steven Chu announced today that the U.S. and its partners in the International Energy Agency have decided to release a total of 60 million barrels of oil onto the world market over the next 30 days to offset the disruption in the oil supply caused by unrest in the Middle East. As part of this effort, the U.S. will release 30 million barrels of oil from the Strategic Petroleum Reserve (SPR). The SPR is currently at a historically high level with 727 million barrels.

Upon hearing the news, my first question was “What’s the emergency?” Crude oil prices have been falling recently. The market abruptly fell 5%, which will affect gasoline prices in the short term, but the futures market is less convinced that the impact is permanent. (We noted last week, before the release, that the futures premium 6-12 months out was $2 to $3; now it is $4 to $5, all the better for the Koch Brothers.)

I concluded that the President’s goal is a bump in the polls, but that the effect would be short-lived. Most in the media concluded the same.

But then I reread the DOE press release: “… the U.S. and its partners in the International Energy Agency have decided … .” Ach so. Our International President strikes again. Ceding control of a uniquely American asset to an international body is troubling, but par for the course in the Obama Administration.

Then I read the press release one more time.

The Administration will continue to consult closely with other consuming and producing countries in the period ahead.

Reserves in the SPR are sufficient to allow Mr. Obama to play this game from now until the November 2012 election.

In 2008 the Congressional Research Service  issued a report titled “The Strategic Petroleum Reserve: History, Perspectives and Issues” (pdf link) which describes the legal requirements for a President to order a draw on the SPR. Initially created as strictly a emergency stockpile for domestic supply disruptions, in 2005 Congress loosened the drawdown criteria and explicitly contemplated IEA cooperation.

Excerpt from "The Strategic Petroleum Reserve: History, Perspectives and Issues", a report prepared by the Congressional Research Service, May 8, 2008. Highlighting added.

Read that last highlight again. A conniving president could, if I read the CRS study correctly, declare back-to-back emergencies eight times between today and the November 2012 elections. Eight times 30 million barrels is 240 million barrels. Take that away from the 727 million currently in inventory, and it leaves you with 487 million barrels, just under the statutory minimum volume of 500 million barrels.

That’s a half million barrels a day, on average, between now and the election. That’s enough oil to offset the production capability destroyed in the Gulf of Mexico by the Administration’s overreaction to the BP oil spill.

Events in Libya took 1.5 million barrels per day off the world market. The graph below shows a six-month timeline of crude oil prices, showing the effect of Libya’s turmoil on the spot prices for “West Texas Intermediate”, the dominant U.S. benchmark crude oil, and “Brent North Sea”, the European standard. 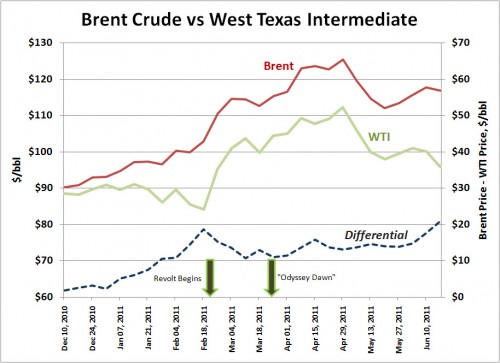 The dashed line is the price difference between the two benchmarks. Six months ago, Brent crude traded at a premium to WTI of only $1.75 per barrel. WTI prices have been soft because of a relative oversupply of oil at the Cushing, OK trading hub, thanks to recent drilling successes in North Dakota and South Texas. To the extent there is an “emergency”, it’s a lot more urgent for Europe than it is for the U.S.

Who are the IEA member countries? Basically, the European Union, plus the U.S., Canada, Australia and South Korea.

IEA’s announcement of the release makes no separate mention of the U.S., although SPR oil accounts for half the total. In the IEA account, the release was an IEA decision.

International Energy Agency (IEA) Executive Director Nobuo Tanaka announced that the 28 IEA member countries have agreed to release 60 million barrels of oil in the coming month in response to the ongoing disruption of oil supplies from Libya. This supply disruption has been underway for some time and its effect has become more pronounced as it has continued. The normal seasonal increase in refiner demand expected for this summer will exacerbate the shortfall further. Greater tightness in the oil market threatens to undermine the fragile global economic recovery.

Here are some questions that journalists should be asking Secretary Chu, Secretary Geithner and President Obama:

3 Responses to Why Did Obama Open the Strategic Petroleum Reserve?