In Part I: Ridiculing the Press, we looked at press coverage of the Bayou Corne Sinkhole, an ongoing environmental incident in Assumption Parish, Louisiana. That coverage has ranged from indifferent to uninformed to inflammatory. I decided I had to assess it for myself.

First, it helps to know what a salt dome is:

Salt domes are a common feature of the Gulf Coast. The dome itself is composed of solid rock salt. Domes are somewhat cylindrical. They commonly reach almost to the surface (like at Avery Island, the home of Tabasco sauce), while the base of the pillar may be in a salt layer at 20,000 feet or more in depth.

Salt domes are commercially significant. Rock salt is mined in some. The dome structure also provides an ideal trap for oil and gas, so many have oil and gas accumulations on their flanks (depicted in green in the cartoon immediately above).

The salt has an important property: it is massive and nearly pure, and a cavern in it makes a great container, like a big jug. The Department of Energy uses salt dome caverns for its Strategic Petroleum Reserve. Private companies use man-made caverns for industrial storage, often of natural gas or refined petroleum products.

Near Bayou Corne, the Napoleonville Salt Dome hosted several man-made caverns. This sinkhole is the result of the failure of a cavern owned by Texas Brine, LLC, a company based in Houston. The cavern is located on property owned by Occidental Chemical, which consumed produced chloride at a nearby plant.

This cavern was not used for storage. It was a source of saturated salt water and trace minerals that are used in a variety of industrial processes. The injection of fresh water dissolved a cavern inside the solid rock salt pillar. The cavern was up to 300 feet across; the top was at 3,400 feet below the surface and the base was at 5,624 feet.

Operations started in 1982. In 2009, the cavern failed a pressure integrity test (an indication of a minor leak) and mining operations ceased. The cavern was ordered to be abandoned by the Louisiana Department of Natural Resources (DNR). Texas Brine complied in June, 2011.

About a year ago, bubbles of unknown origin were reported in the Bayou Corne area. At first, a pipeline leak was expected, but by August a sinkhole formed. About 350 residents of the nearby community of Bayou Corne were evacuated. What started as a few bubbles eventually grew to an unstable 24 acre pond that, as we saw in Part I, continues to suck in land and cypress trees. The Google Earth images below compare “before” and “after”.

The problem as diagnosed by CB&I, engineering consultants to the DNR, is that the cavern designated “Oxy 3” was constructed too close to the side of the dome. The 1982-vintage subsurface maps showed the salt face sloping away, when in fact there is an apparent overhang.

CB&I’s diagram shows their interpretation of the failure: 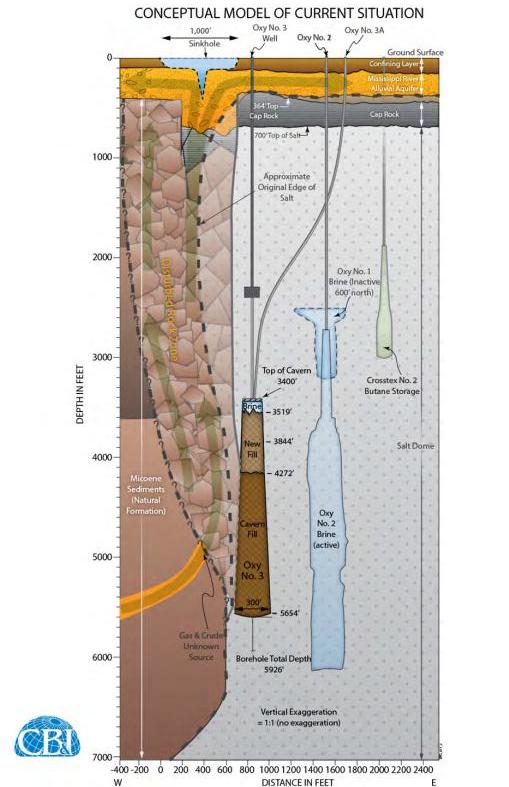 This interpretation is not speculation or conjecture. A three-dimensional seismic survey was acquired to image the subsurface in much the way that doctors use MRI’s for internal images of the human body.

It appears that the side wall of the cavern failed. Rubble and debris began to fill the water-filled void of the cavern. A disturbed zone of rock (DRZ in the top diagram) realigned, ultimately reaching the surface and creating the sinkhole. (This is the first documented case of side-wall collapse of a salt cavern. Caverns have failed before, but always through the roof, not the side.)

The environmental calamity here is not that, in the words of Mother Jones’ lurid headline, that the “sinkhole will swallow the town”. Eventually the cavern will fill and stabilize. But the disturbed zone provides a pathway to the surface for small accumulations of fluids that were otherwise static, trapped against the salt. As the diagram shows, they also threaten the Mississippi River Alluvial Aquifer, the shallow freshwater sands that underlie the area. That’s the big problem: gas in the MRAA could pose a safety threat to nearby residents if this leakage were allowed to continue unabated.

Since the residential evacuation a year ago, Texas Brine has paid each family $875 per week for temporary living expenses. Obviously, the displaced residents’ nerves are frayed. Some permanent buyout offers have been made and accepted.

Without admitting blame, Texas Brine has generally cooperated with DNR requests. Texas Brine has insurance, and DNR deems the coverage to be sufficient. DNR is also acting in response, and will expect to be compensated for its expenditures, plus any penalties that may ultimately be assessed. To that end, on August 2nd the State of Louisiana and Assumption Parish filed suit against Texas Brine and a subsidiary of Occidental Petroleum. (The sinkhole first opened August 3rd a year ago; filing within one year beat the statutory deadline.)

The red arrows on the Google Earth image above, dated 3/12/2013, show some of the environmental response in progress. None of these structures existed prior to the sinkhole. The growth of the sinkhole is primarily to the east, toward the crest of the dome and away from the community.

One well, the Oxy 3-A (see CB&I diagram above) has been drilled to reenter the cavern and assess its status. It has been determined that the cavern is filling with rock at the rate of 1-2 feet per day.

Thirty-nine (of 42 planned) wells have been drilled to vent gas from the shallow aquifer. Sixteen million cubic feet of gas have been vented to date, of an estimated 45 to 50 million cubic feet. (That may sound like a lot of gas, but in industry terms, it’s not. A typical commercial gas well would produce ten to one hundred times more gas in its lifetime.)

Thirty wells have been drilled to monitor water quality and pressure.

Three wells have been drilled for the purpose of monitoring seismic activity. Four subsurface surveys have been run to monitor the salt face. A 3-D seismic survey has been run and is being independently evaluated. It is being used to define the spatial configuration of the salt and the zone of disturbed rock.

Air quality is continuously monitored. Ground surveys monitor subsidence. Oil skimming operations at the sinkhole recover the oil on the surface, which leaks at a rate of a few gallons a day.

In addition, external experts have been engaged to assess the data gathered. These include Federal agencies (DoE, Interior, EPA); more than two dozen contractors and consultants; and a blue-ribbon commission made up of world-class experts in salt domes, solution mining, gas migration and so on from Sandia Labs, Canada and Europe.

What the Future Holds

It seems likely that the sinkhole will stabilize once the cavern is full. The cavern is a finite volume, and once it is full, it’s full. (In other words, citizenkh, it will never connect to the Macondo blowout, the New Madrid fault, or China. I promise.) Whether Bayou Corne will be habitable will depend on the effectiveness of the response and cleanup.

If my cipherin’ is correct, a cylinder a 2254 feet long and 250′ average diameter would have a volume of about 4.2 million cubic yards. That’s probably a high-side estimate of its capacity.

CB&I estimated that the volume of the sinkhole reached 2.0 million yards by June 2013. More importantly, soundings indicated the cavern was about 2/3 full.

So we may have continued seismic activity and occasional dramatic videos of trees disappearing for a while longer — maybe six months? Who knows. Gradually, though, it will stop.

As I suggested previously, the leakage of gas, oil and water may continue for some time, and that’s the bigger environmental concern. Gas recovery activities will have to continue until the excess gas in the MRAA is gone. Surface monitoring and collection of oil seepage will have to continue, perhaps indefinitely.

When I started researching this for this series, I was skeptical that the response was adequate or that sufficient resources were being dedicated to the problem to contain it. I have learned that the failure mechanism is reasonably well understood and that safeguards are in place to minimize the potential for lasting environmental damage.

Industrial accidents are never a good thing. Unfortunately, just as we accept a low level of risk when we travel by plane, boat or car, our modern lifestyles and standards of living rely heavily on petrochemicals and other natural resources. In satisfying our demand, industry creates risk to people and to the environment. The risk level is comparatively low, but never, ever zero. As citizens in this economy, it is good that we be aware of our dependence and our collective assumed risk.

Otherwise, we’ll be as lacking in self-awareness as these anti-fracking ninnies in the U.K. (from wattsupwiththat.com).

This entry was posted in Environment, Louisiana. Bookmark the permalink.