‘None of the Above’ is not an Energy Strategy

We Americans are voracious energy consumers. In 2010, we consumed 98 quadrillion BTUs of energy. In addition to quantity, we have an expectation of quality (read: reliability). When we flip the switch, the light comes on — every time. Gasoline is always available at the pump; we may not like the price, but at least we don’t have to wait in line.

Energy reliability depends on infrastructure, the railroads, pipelines and power lines to deliver power to the people who demand it.

Insatiable demand stands in direct conflict with the Green attitudes of a large segment of the voting public. The Baby Boomers’ political coming-of-age coincided with the first Earth Day in 1970. The Boomers raised their children on a steady diet of Captain Planet and FernGully. Our media and institutions bestow accolades and honors on environmental hypocrites and frauds like Al Gore and Josh Fox.

Priuses notwithstanding, our Greens are still big energy consumers.

It’s a given that the Greens are opposed to expanded development of coal, oil, natural gas, nukes, hydropower, and corn ethanol. (See chart below: those sources accounted for roughly 96 quads of the 98 we consumed in 2010.) 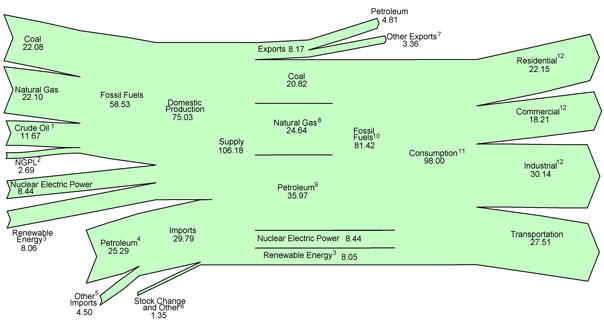 I say “nominally”, because while they like the concept of wind and solar, there is increasing opposition to transmission lines. Transmission lines are the only way to get the power from its source to the

consumer. Once upon a time, it was Not In My Backyard. Now it’s Not In My Watershed, In My Playground, In My Line of Sight or In My Dune Lizard’s Habitat.

In central Texas, a coalition of environmentalists, conservationists and landowners is similarly fighting against the planned construction of high-voltage power lines to bring electricity from the huge wind farms of West Texas to the urban corridor of Dallas, Austin and San Antonio.

“This is beautiful country with huge heritage ranches, amazing biodiversity, endangered species and the headwaters of important rivers,” said Christy Muse, executive director of the Hill Country Alliance, a group dedicated to preserving the resources and heritage of central Texas. “A lot of people jumped on the renewable bandwagon — it’s a sexy agenda. But this is a special landscape, and does this minimal contribution to the grid outweigh the degradation these lines impose?”…

The Sunrise Powerlink, a high-voltage line that will connect wind and solar projects in California’s Imperial Valley with San Diego, faced a procession of legal challenges since it was first approved by the California Public Utilities Commission in 2008.

In his recent State of the State address, Gov. Andrew M. Cuomo of New York proposed creating an “energy highway system” of high-voltage lines to bring power from wind and hydropower projects upstate and in Quebec all the way to New York City. He might recall that a similar transmission system, New York Regional Interconnect, was proposed in 2006, only to be withdrawn after four years of court battles with residents and environmentalists in the Hudson Valley.

Our nation has a history of national-scale infrastructure projects. During World War II, it took but a year to build the Big Inch and Little Inch Pipelines to deliver fuel from Texas to the Northeast. The Trans-Alaska Pipeline took two years in the most hostile environment imaginable. The Interstate Highway System has transformed our lives while delivering a huge economic boost. Which of these projects could survive today’s anti-development environment, with endless Environmental Impact Studies and court challenges?

The populist anti-development stance has become the default position of the Democratic Party. This is the party of Joe Biden, who as a young senator voted against the Trans-Alaska Pipeline (I’d hate to think where we’d be if his side had prevailed.) Obama has kicked the Keystone XL can down the road, past the 2012 election. His Interior Department continues to tie offshore drilling permits in knots, while keeping 85% of the Outer Continental Shelf off-limits for exploration.

Every Thanksgiving, my family recounts the story of Cousin Mo. Peering over the edge of the table laden with a holiday bounty of turkey, ham, pies and other goodies, 4-year old Cousin Mo pointed at each dish in turn:

Four-year olds have the luxury of being able to be against everything. Grown-ups do not. Grown-ups can figure out how to deliver the energy we need, in a safe and environmentally responsible manner, if only Cousin Mo would sit down and be quiet.