The latest dispatch in the New York Times‘ ongoing editorial series “Those Mean and Ignorant Republicans” comes from Bruce Bartlett, who served in the Reagan and Bush I administrations and on the staffs of Jack Kemp and Ron Paul. Bartlett is the kind of faux-GOPer that the Times likes to trot out to skewer Republicans. In this piece, he seems to go out of his way to misstate and intentionally distort the conservative low-tax position.

Bartlett supports his case with facts and figures (see Exhibit A below).  It’s hardly a compelling argument because the income groups Bartlett considers do not include “The Rich”, the current battleground for tax policy. Indeed, Bartlett’s table actually makes a pretty good case against the Leftist insanity of Progressive Taxation. 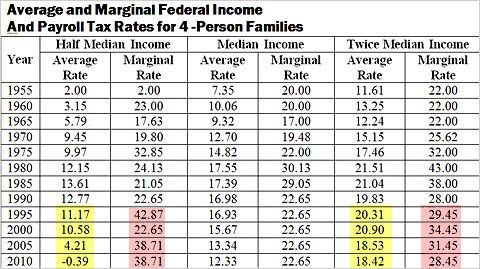 Tax Policy Center data showing average and marginal tax rate data for families of four. Taxes include income tax and the employee portion of the payroll tax. Tax rates are shown as percentages for families at 50%, 100% and 200% of median household income. Emphasis added.

Are Taxes High or Low? A Further Look

…[T]otal federal revenue — income, corporate and payroll taxes combined –– has been below 15 percent of gross domestic product for three years in a row, its lowest level since 1950 and well below the postwar average of about 18.5 percent of G.D.P.

Actually, that’s evidence that we are on the downward-sloping side of the Laffer Curve, the region where government revenues actually decline with increasing tax rates.

…For years, Republicans have told [folks] over and over again that taxes in the United States are exceptionally high and the primary obstacle to growth, and that a huge tax cut would do more to raise growth than any other policy. …

Many in the Tea Party talk as if the value of government is zero; consequently, they would probably complain about any tax level above zero.

Balderdash. I’ve never heard Tea Partiers suggest that taxes should be zero. Most Tea Partiers recognize a legitimate role of government (national defense, for example), and nobody expects it to be free. The debate is over the size and responsibilities of government, and its encroachment on personal freedom.

Those who assert that taxes are rising or are at confiscatory levels simply do not know what they are talking about.

That’s Bartlett’s ultimate conclusion. But don’t you think, before concluding that, we might look at who’s actually paying the bulk of income taxes?

Proportion of federal income taxes paid by income group, 1980-2008. From the Heritage Foundation.

Bartlett’s analysis isolates the brown, red and orange slices of the Heritage bar chart. Ninety percent of taxpayers fall into those groups, and collectively they pay only 30% of income taxes. Conversely, the proportion of the income tax paid by the top 10% has increased from under 50% in 1980 to 70% in 2008.

It’s that top 10% which is responsible most capital investment, and most job growth. Any judgments made about whether or not taxes are excessive must include them.

Given his history as a supply-sider, one would think that Bruce Bartlett would agree that for high net worth individuals, high marginal tax rates discourage investment and encourage tax-advantaged investment strategies like municipal bonds. Some have even moved to tax havens to avoid confiscatory tax rates. A less confiscatory tax scheme would put idle capital to work and grow the economy, and ultimately government revenues.

But high marginal rates (as high as 40%!) for low income families are insane and immoral.

Average tax rates for the poorest group are very low — even negative in 2010. That is because the Earned Income Tax Credit (EITC) which is a negative tax, an an “off the balance sheet” income redistribution program for the working poor with families. The EITC is phased out for income above a threshold. EITC recipients therefore have a high marginal tax rate, and a strong disincentive to seek additional income (overtime, promotions or part-time jobs).

We should be helping these people out of poverty, not making their road out steeper.

One of the most dehumanizing aspects of the Leftist worldview is their insistence on regarding our society as discrete, static social groups: The Middle Class, The Working Poor, The Rich, and so on. Professor M.J. Perry blogged about the dynamic of income and class mobility in American society, a process of continual renewal.

He goes on to quote some statistics from “The Politics of Envy” in The Hoover Digest, by Jeffrey Jones and Daniel Heil.

A Treasury Department study of the 1996–2005 period used IRS income tax data to discern considerable mobility: more than 55% of taxpayers moved to a different income quintile. More than half the people in the lowest fifth of earners moved to a higher quintile over this period (29% to the second, 14% to the third, 10% to the fourth, and 5% to the highest).

Moreover, there is a great deal of movement in and out of the top income groups. The Treasury data show that 57% “of households in the top 1% in 2005 were not there nine years earlier.” The rich sometimes get richer, but they get poorer as well.

Our strongly progressive tax code builds an unhealthy rigidity into our system. It would be possible to fix it with a flatter and fairer tax system, while at the same time closing the chasm between government spending and revenue. But first we’ll have to dismantle 80 years of “Progressive” social class theory and liberal dogma.

One’s decision as to whether the opportunity for increased income is worth the effort (or risk) depends on his marginal tax rate, not the average. It’s kind of like climbing a hill; the steeper the rate, the more effort is required to make progress.