A recent article in the New York Times considered disparity of income distribution in the U.S. An attached graphic, reproduced and annotated below, shows the income threshold to be in the top 1% of income earners, by county, in the year 2013. (Click the link and look at the graph. Say what you will about the Old Grey Lady, but she publishes some of the best graphics around.)

The Times sniffs that some of the high-bar counties are actually in flyover country, for God’s sake.

[The] rich are also moving beyond the traditional hubs of the Northeast and California, creating some unlikely 1-percenter enclaves, such as Wyoming [i.e, Jackson Hole – ed.]. North Dakota also moved up the 1-percenter ranks — from 45th to ninth from 1979 to 2013 — as the oil boom lifted the fortunes of its fortunate.  [emphasis added]

Surely, most of the wealth in these rural counties is due to mineral royalties, the existence of which is apparently not taught in journalism school. When a landowner makes a lease with an oil operator, he normally gets an up-front “bonus” for the lease that could be hundreds up to many thousands of dollars per acre. If drilling happens and in successful, the landowner bears 0% of the cost but retains royalty, a share of the revenue — off the top — that may be 15 to 25%.

So, in round numbers, North Dakota produced 1 million barrels of oil a day in 2013. The wellhead price averaged $90 per barrel in 2013 — at 20% the royalty share was about $18. That’s $18 million per day distributed among the state’s royalty-owning interests — almost $6.6 billion for the year. That’s just royalties, not bonuses and other payments to landowners. The oil company’s other costs — drilling investments, equipment, payroll, utilities, insurance, taxes*, etc., etc., — are separate; they are paid out of the operator’s share of revenue. (* North Dakota’s state severance tax is 11.5% of wellhead revenues, separate and apart from landowner royalties.)

(The average price was $41 in 2015; even though rates were higher, overall revenues to landowners was probably half the 2013 level. But still!)

Many of the beneficiaries of this income are the farmers and ranchers who have scratched and clawed an existence in unforgiving climates of the Great Plains and West and South Texas. Fortune has surely smiled on them, but they are not a class of fortunate silver-spooners The Times would have you imagine. 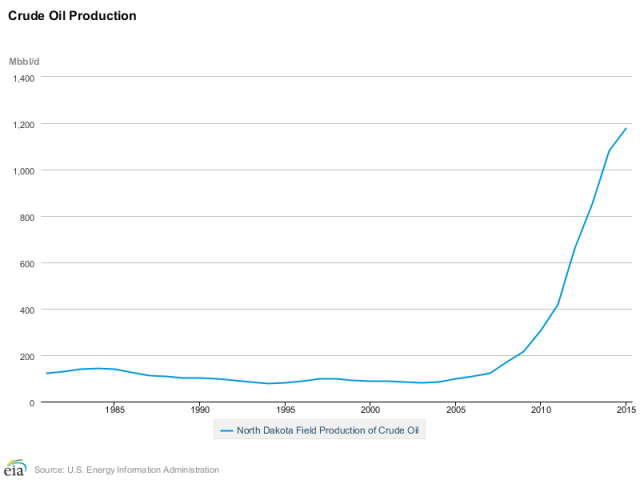 North Dakota Crude Oil Production in thousands of barrels per day since 1980. (www.eia.gov)

Despite the negativity many associate with fracking, the controversial technique for extracting oil and natural gas from the earth had a positive impact on mortgage defaults in areas where fracking occurred, according to research by a Clemson University finance professor.  . . .

“When there’s discovery of a mineral resource, a property becomes more than a place to live. The mineral rights are tied to property ownership. If a person defaults on the mortgage and loses the property, they lose the mineral rights and the potential revenue they could have generated from those rights,” Shen said. [Lily Shen is assistant professor of finance in the College of Business.]

With all due respect, my explanation is much simpler. Mineral extraction on private lands directly benefits not only the property values of landowners, but their cash flows too. The build new houses, buy new cars and trucks and furniture, deposit their money in local banks. Not only that, the oil company activity supports jobs and supply and service companies across the spectrum: hotels, restaurants, contractors. Severance taxes and property taxes benefit host states and local taxation districts. And all this income is federally taxable, too, so there’s that.

Ironically, the thrust of the original Times story was this:

The new peaks and valleys of America’s elite have made national definitions less and less useful. The 1 percent is no longer the very top layer of the national economy, but a much deeper slice of residents in high-income, high-cost states like New York, Connecticut and California.

“A tax on the 1 percent is increasingly a regional tax,” Mr. Price said. “On average, more folks will be touched by higher rates in New York than, say, West Virginia.”

Nationally, the 1% threshold income is $389,000 per year. A mere $389 K doesn’t feel “rich” in Fairfield, Connecticut, or Marin County, California. My response:

This entry was posted in Economy, Energy, Fracking, Government, Oklahoma, Uncategorized and tagged Fracking Lies and the Fracking Liars Who Tell Them. Bookmark the permalink.