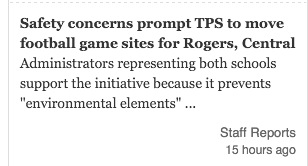 Oh, my gosh. We certainly would not want to expose student-athletes to “environmental elements”. The mind reels as it imagines a football pitch-cum-Love Canal poisoned with pesticides, herbicides or  (G_d forbid) “fracking chemicals“.

As it turns out, this particular football suffered from environmental contamination, alright: a potentially lethal combination of charcoal, sulfur, saltpeter and lead.

[Eighteen year old Dominique] Morgan … attempted to enter the Central High School vs. Springdale, Ark., football game at S.E. Williams Stadium while wearing a backpack but was denied entry with the backpack by Tulsa Public Schools police officers, according an arrest report.

After he then left the backpack nearby and entered the stadium, police searched the backpack and found a sawed-off shotgun in it, police alleged. …

“Environmental elements”? Seriously? That’s the kind of blamelessly passive response to a serious threat that we’ve come to expect from today’s “professional educators”. The only thing wrong with the environment at S.E. Williams Stadium is that it contains thugs with guns.

This entry was posted in Environment. Bookmark the permalink.