So When Did The Obama Show Jump the Shark?

Where news and entertainment content in the media were once distinct and exclusive domains, the demarcation have become blurred. Fox News reports American Idol results as hard news, while Saturday night network programming is given over to the Suburban Housewife Murder Mystery of the Week. Maybe the networks are to blame.

Or maybe it’s the low-information voter, who can’t tell the Constitution from the Yellow Pages but sure knows that Barack Obama sings more like Smokey Robinson than that stiff Mormon guy.

Whatever the cause, our government, the one in Washington, D.C. right now, has begun to smell like bad TV. It is part reality show, part game show and part cheesy sitcom, all the while 100% insulting to the intelligence.

Barack Obama acts both as host/producer of Survivor: D.C. and as leader of the Blue Team. It’s his job to orchestrate the contrived challenges by which the Blue Team tries to zap the Red Team’s power and eliminate it from contention. That happens for individual members when they get voted out of office, or when they tweet pictures of their private parts to 38,000 followers, like some some stoner refugee from The Real World.

These contrived challenges have names like The Fiscal Cliff and Sequestration. They are wholly artificial, designed to entertain, titillate and otherwise engage a mostly-disinterested public, while creating the illusion that Something Important Is Happening in D.C. By G_d, we’re playing a game here, and the audience expects winners and losers.

In a nod to the popular reality series The Biggest Loser, Obama regularly trots out a grossly obese fellow named Uncle Sam, and feigns an attempt to grapple with him. Uncle Sam tips the scales at $3.5 trillion dollars per year, has no diet plan and never loses weight. To Obama, Uncle Sam is a lean athletic machine operating at insanely high efficiency; even modest attempts to lose weight would surely cut sinew and bone instead of blubber.

Solyndra and other Green Energy giveaways were Obama’s version of Let’s Make a Deal! Nobody who’s willing to dress up and play the fool goes home a loser. The taxpayer, however, has found a Zonk! in every box and behind every curtain.

Our own party gets suckered into playing along, lest it incur the disdain of the viewing — and voting — public. If they’re willing to play along, who knows? Just like on The Bachelor, the attention-seeking pol may be rewarded with some, *ahem*, alone time with Washington’s Most Desirable Male: “Senator McCain, will you accept this rose?”

But Obama is on thin ice. Nobody tunes into awards shows any more to see who won, we’re more interested in who’s the butt of the most vicious jokes; the more powerful and esteemed the target the better we like it. Thanks to post-modern fare like The Office, the audience sees the artifice behind the production. The real “Biggest Loser” is the last one in the audience to get the joke.

So when will the public in general tire of Obama’s schtick? 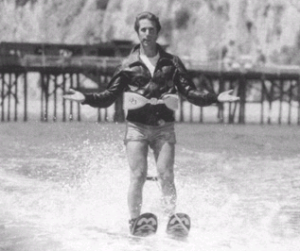 For me, the moment came in the 2008 debates with John McCain. Asked whether he’d favor cuts in capital gains taxes, which have always generated windfalls in tax revenues, Candidate Obama answered “no”. It’s not a matter of tax efficiency, he said, it’s a matter of basic fairness. “Uh-oh,” I said.  “We’ve got a guy who sees the tax code less as a necessary means to fund the government and more as a bludgeon to punish ‘the rich’.”

Obama Jumps the Shark, Takes One Leap Too Far

This week, President Barack Obama lashed out at the Supreme Court, slamming it as an “unelected group of people” who will have turned to “judicial activism or a lack of judicial restraint” if they strike down Obamacare. In other words, he was implying that the Court does not have the authority to overturn a law that was passed by Congress if they find it unconstitutional.

Also in April 2012, a caller to the Rush Limbaugh Radio Show thought that Obama had jumped the shark when he appeared on The Jimmy Fallon Show to slow-jam the news.

When the president did that, the only thing I could think of… The picture that I saw with Fallon in the foreground and the president in the middle, and then I guess the band was behind him and it was all dark and everything, would have been better if there had been a billowing of smoke and a big cigarette hanging out of his mouth. It was truly, truly nauseating.

Even the Wikipedia page for Jumping the Shark credits an unlikely source for an Obama Jump-the-Shark moment:

In 2008 during the Obama presidential campaign, at a meeting of Democratic governors in Chicago, each governor was identified with a name plate while Senator Obama had a large seal – that looked official but was not. The New York Times op-ed columnist Frank Rich wrote “For me, Mr. Obama showed signs of jumping the shark two weeks back, when he appeared at a podium affixed with his own pompous faux-presidential seal”.

OK, reader, how about you? When do you think Barry jumped the shark?