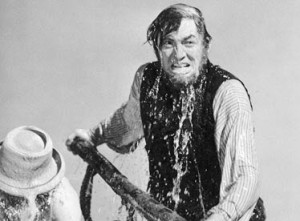 Rep. Ed Markey of Massachusetts, ranking member of the House Natural Resources Committee, has an obsession. Markey’s Great White Whale is called the Deepwater Royalty Relief Act of 1995 (details below the fold).

In Markey’s mind, several deepwater Gulf of Mexico operators have gotten over on the government to the tune of several billion dollars in unpaid oil and gas royalties. The operators counter that they’re honoring to the letter of the leases that were granted in 1997 and 1998 to encourage exploration during a period of low oil prices.

The courts have blocked Interior from unwinding DWRRA. Congress has tried and failed to take away the benefits of DWRRA. A new tax to penalize the recalcitrant companies has been a centerpiece of President Obama’s budget proposals since he took office. Markey can’t let it go.

Now he has a new angle. In a letter to Treasury Secretary Tim Geithner, Markey suggests blocking the $15.1 billion acquisition of Canada’s Nexen Inc. by the state-owned China National Offshore Oil Corporation (CNOOC) until Nexen pays back royalties on DWRRA tracts. Treasury gets involved becasue 10% of Nexen’s assets are in the Gulf of Mexico.

Here’s the part where Markey channels his internal Doctor Evil:

In response to this potential merger and the loss of taxpayer money to the Chinese government’s benefit, Rep. Markey today sent a letter to Secretary Tim Geithner highlighting the fact that Nexen has already drilled (sic) 32 million barrels of oil and 34 million cubic feet of gas for free without paying a dime to American taxpayers in royalties and that this giveaway could transfer directly to the Chinese government-owned company if the merger goes forward as planned.

Thirty-four million cubic feet of natural gas?! Why, at today’s prices, the government’s share of that would be worth almost $15,000.00!! (Actually, of course, the correct figure is 34 billion cubic feet. What’s a factor of 1,000 among friends?)

[Note to Rep. Markey: I am available to consult with you or your staff on proofreading or other technical matters. You might not like my consulting rates, however; they have recently increased due to the expectation of tax increases. – SM]

The DWRRA authorized the Department of the Interior to create incentives for the development of deepwater oil and gas leases in the Gulf of Mexico during times of low prices (oil was generally in the $10 to $30 per barrel range in the late 1990s). By waiving the normal 12.5% royalty due to the Federal government on production, Interior created an economic incentive for exploration. The astronomical cost of deepwater drilling and developemnt may not have been justifiable without the relief.

Most of the leases called for an end to royalty relief if the price of oil exceeded $35/bbl. Not the 1997-98 vintages of leases, though. For those leases, relief ended only when a predetermined number of barrels had been produced.

In retrospect, it looks like a screwup. Oil has been consistently above $35/bbl since 2004, and the government has left a lot of money on the table. Some of the lessees (notably Shell, BP and ConocoPhillips) have voluntarily honored the economic provision at Interior’s request. A long list of smaller companies have not.

In a similar case between private parties, the plain language of the lease contract would prevail. In a case where there were a contractual error that accrued to the government’s benefit — good luck suing the government. But in the case of the DWRRA, Interior sued the reluctant oil companies.

The case was Department of the Interior et al v. The Kerr-McGee Oil and Gas Corp. In 2009, the Supreme Court declined to hear an appellate court decision blocking Interior from collecting the royalties.