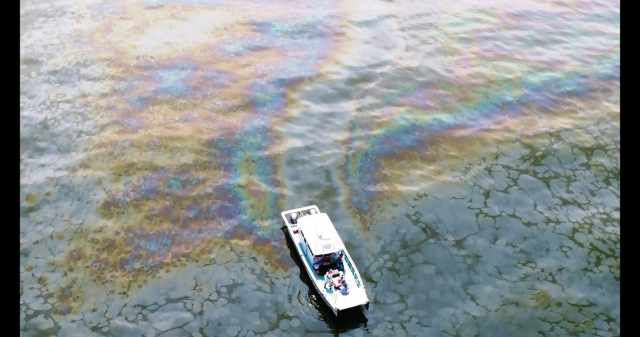 Photo caption: An aerial image of an oil slick in the Gulf of Mexico, taken on April 28, 2018. (Oscar Garcia-Pineda)

WaPo Headline: A 14-year-long oil spill in the Gulf of Mexico verges on becoming one of the worst in U.S. history

The more I read this article, the more errors I find.

Author Darrel Fears depended heavily on Oscar Garcia-Pineda, described as a ‘geoscience consultant’, for estimates of spill volume. Garcia-Pineda’s estimate of the spill’s ongoing rate is 300 to 700 barrels per day for 14 years; at the upper end, that’s 3.6 million barrels, which, if true, would be on the order of magnitude of the BP spill (est. 5 million barrels +/-).

Problem is, Garcia’s own photo (above) documents a silvery to rainbow sheen.

Fears says, “…all that is left of the doomed Taylor platform are rainbow-colored oil slicks that are often visible for miles.”

I took annual Oil Spill Response Training for 10 years. This is a federal requirement of all personnel whose jobs might put them in charge of oil spill response. I learned in that training (in fact, I learned it 10 times) that oil spill volumes are estimated on visual observation. I offer more details here; suffice to say that Fears’ observation and Garcia’s photo lend credibility to the Coast Guard’s official estimate of from 1 to 55 barrels per day. Over 14 years, it has probably averaged on the low end of that range.

300 to 700 barrels per day is simply not credible. You would necessarily see heavy, oil-colored slicks, not silvery or rainbow sheens.

This oil leak followed the destruction of a Taylor Energy oilrig by Hurricane Ivan in 2004, and since then small quantities of oil has kept spreading at the surface of the Gulf. (Verbatim, emphasis added.) 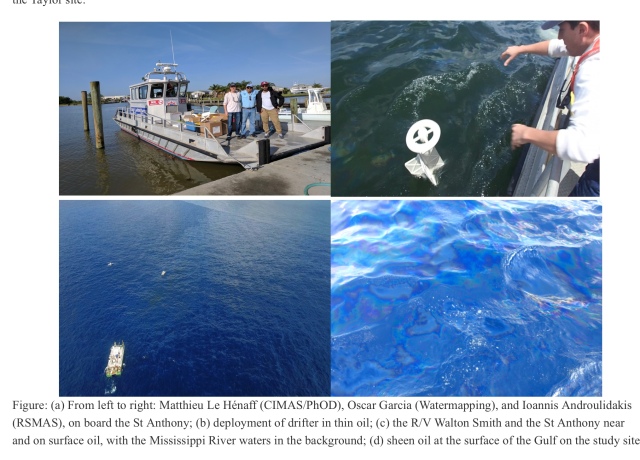 So when did “small quantities of oil” as documented in all these pictures become 300 to 700 barrels per day, a major spill by any estimation?

Did Garcia mean 300 to 700 gallons per day? That would be roughly 7 to 17 barrels per day, consistent with the USCG estimate, and more in line with the visual evidence. Certainly not stop-the-presses headline worthy.

“There is abundant evidence that supports the fact that these reports from [USCG National Response Center] are incorrect,” Garcia-Pineda wrote. Later he said: “My conclusion is that NRC reports are not reliable.”

My conclusion is that Mr. Garcia-Pineda needs to check his data and his cipherin’. Also: Never trust a journalist with a calculator.

Mr. Fears continues to wing it:

About 2,000 platforms stand in the waters off the Bayou State. Nearly 2,000 others are off the coasts of its neighbors, Texas and Mississippi.

Wrong. There are fewer than 2,400 structures in federal waters. I suspect 2,000 of them are off Louisiana; many of those are single-well structures in shallow water. So that leaves more like 400 off TX and MS (and AL).

For every 1,000 wells in state and federal waters, there’s an average of 20 uncontrolled releases of oil — or blowouts — every year.

A fire erupts offshore every three days, on average, and hundreds of workers are injured annually.

According to the incident reporting link above, there were 73 fires in 2017. That’s one every 5.0 days, to be exact. Sixty-seven of them were classified ‘incidental’. Five were ‘minor’ and one was ‘major’ (damage > $1,000,000). There was one injury associated with fire.

There was also one explosion.

In 2017, there were 150 total injuries of all types (not ‘hundreds’); 39 involved no lost time and no restricted duties. These could be ‘first-aid’ incidents: slip-and-fall, cuts, heat exhaustion, etc. Forty-one of the incidents involved lost time in excess of 3 days. There were no fatalities.

According to Fears, when Hurricane Ivan hit Taylor’s ill-fated platform…

More than 620 barrels of crude oil stacked on its deck came tumbling down with it.

Ummm, they don’t use physical barrels.

The spill was hidden for six years before environmental watchdog groups stumbled on oil slicks while monitoring the BP Deepwater Horizon disaster a few miles north of the Taylor site in 2010.

Taylor’s platform was in a mudslide area just beyond the mouth of the Mississippi River. BP’s Macondo well site was in deep water, well to the south.

It may sound like I’m picking nits here, but the whole point of the article is to serve as a ‘cautionary tale’ for the states on the East Coast that would consider drilling in the Atlantic Region.

Misrepresenting the volume and the risk matters.