In March 2015, the journal Environmental Science and Technology published findings of study linking natural gas extraction activity to high levels of Polycyclic Aromatic Hydrocarbon (PAH) in Carroll County, OH. The study’s conclusions were widely repeated in the press and the paper was cited in at least nine other studies and peer-reviewed journals. 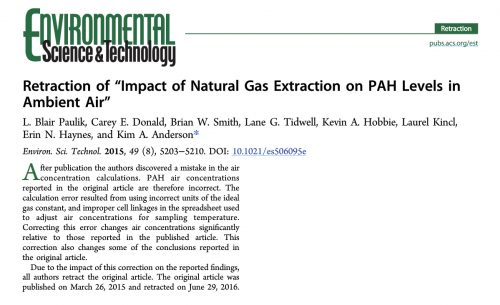 Seth Whitehead at Energy in Depth has more:

UC’s rush to publish its air study while it dawdles for a year in publishing its groundwater study finding no harm from fracking is even more interesting considering the results of both studies were first announced at events hosted by Carroll County Concerned Citizens (CCCC), a well-known anti-fracking group. The same professor that presented the air quality study results to CCCC, study co-lead author Dr. Erin Hayes, has also participated in other anti-fracking events. [Emphasis added.]

This is not environmental science, it is a sciency charade dressed up for propaganda purposes by agenda-driven activists.

Which raises another question: Since the PAH data were found to invalidate the original conclusions, what did the data reflect? Why not publish the corrected values? Are they not relevant? Since the study was publicly-funded, doesn’t the public have a right to know?

From the retraction notice:

The calculation error resulted from using incorrect units of the ideal gas constant, and improper cell linkages in the spreadsheet used to adjust air concentrations for sampling temperature.

Those sound like rank undergraduate mistakes to me. Using “incorrect units” for the ideal gas constant means they were using the wrong value of the constant, R, for whatever units they were operating in. (More on that here. Given the widely ranging value of R depending on the system of units employed, I’m guessing that the measurements were off by more than a smidgen.*) And “improper cell linkages” means they screwed up the calculations even further.

*  It doesn’t make any sense to me that they would have been using the wrong value of R, substituting, say, pressure in Pascals for atmospheres or vice versa. I’d be willing to bet even money that the mistake they made was using temperature in degrees Celsius instead of degrees Kelvin. Kelvin uses Celsius degrees, but is measured from absolute zero, so that 0 deg K = about -273 deg C, if memory serves.