When your only tool is a hammer, every problem is a nail; to Trump, everything is a negotiation. An election is nothing more than a protracted negotiation with various interest groups (“the blacks”, “the Hispanics”, “the evangelicals”, etc.), not a competition among statesmen vying to win the support of voters.

In a negotiation, every party has its own motives; a good negotiator works to understand each party’s motives, including his/her own. It was predictable that Trump the Republican nominee would run to Hillary’s left. He has to go after disaffected Sanders voters; enough of them will believe his promises about the minimum wage, union jobs and ultimately, I predict, student loan forgiveness that pure monetary self-interest may buy their support.

So in this negotiation, let’s look at negotiating theory in the style of the Harvard Business School, and its implications for conservative strategy in answering the question, “What can Candidate Trump do to justify my vote?”

Each party to a negotiation should be aware of his/her BATNA: “Best Alternative to a Negotiated Agreement”. If you quit the negotiation early (#NEVERTRUMP), the BATNA is the result you accept.

…[The] BATNA is the most advantageous alternative course of action a party can take if negotiations fail and an agreement cannot be reached. BATNA is the key focus and the driving force behind a successful negotiator. A party should generally not accept a worse resolution than its BATNA. Care should be taken, however, to ensure that deals are accurately valued, taking into account all considerations, such as relationship value, time value of money and the likelihood that the other party will live up to their side of the bargain. These other considerations are often difficult to value, since they are frequently based on uncertain or qualitative considerations, rather than easily measurable and quantifiable factors. [Emphasis added.]

The highlighted part is Trump’s dilemma. We’ll get back to that in a bit.

This is where I fall back on my training in the oil and gas business and the practice of Decision Making Under Uncertainty.

A Democratic victory in 2016 is a discrete negative outcome. The Hell that we have will continue for four, or maybe eight, more years. It is our BATNA. Some conservatives have already embraced it, citing logic that frankly escapes me.

The exact outcome of a Trump win is highly uncertain. Might he be a worse alternative than Hillary? An undeniable possibility. Better than Bush I or II? Doubtful but possible. Better than Reagan? Not a chance. I agree with Ben Howe in his assessment that on balance a Trump presidency would be marginally better (i.e., higher in “expected value”, or risk-weighted outcomes) than a Hillary presidency.

What does the Trump Value Proposition look like today, as compared to our BATNA?Consider the following cartoon: 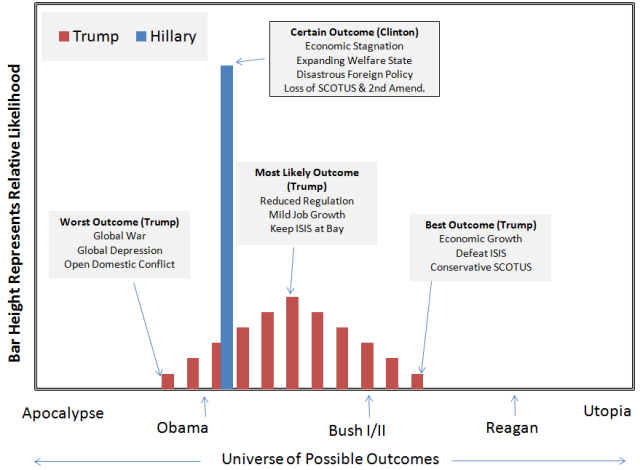 Every voter’s assessment of this value proposition will be different. I’ll not debate the relative values assigned; instead, let’s ponder the implications of negotiating theory. In this base case, the weighted average of the range of possible Trump outcomes is to the right (“better”) than the outcome of a Clinton presidency. I’m conceding here about a 10% chance Trump turns out to be worse than Obama and about the same chance he’ll be more successful than Bush I or II.

What can Trump do the change the Value Proposition for Conservative voters?

Last week, the Trump campaign floated a list of eleven conservative jurists he says he would consider to fill the Scalia seat on the Supreme Court. It’s a negotiation, remember? He’s sweetening the pot.

The problem Trump has created for himself is that his verbal promises mean nothing.

He was opposed to a higher minimum wage, but now thinks we should look at raising it. Negotiating.

He was for building a wall and deporting 11 million, then assured the New York Times with a nod and a wink that he didn’t really mean it. It was, after all, just negotiating.

His goal, after all, is to get elected. That’s it. Unlike the commercial construction business, there are no contracts or covenants that bind the candidate to the representations he makes to gain votes.

Except one. The Constitution.

Sometime between now and the close of the Cleveland Convention, Candidate Trump will select and the Party will nominate a candidate for Vice President.

This is the one bargaining chip that leaves Trump no wiggle room.

Before you say “warm bucket of spit”, consider that President Trump (ugh!) will be 70 years old on inauguration day. Unlikely to serve more than one term. Let’s leave the speculation at that.

Even if frozen out of the day-to-day administration of the nation, a rock-ribbed conservative Vice President could significantly advance our agenda. Could even be President come 2021.

That, my Conservative friends, is what you call a bargaining chip.

How a Vice President nominee might affect the Value Proposition

To assess the value a VP candidate might bring to the ticket, one needs to take into account the chance of his (or her) ascension, and the fact that it won’t happen right away.

Let’s fantasize that a clone of Ronald Reagan exists. If he were to be nominated for Trump’s VP, his value would be represented as additive to the “today”, but waaaay to the right-hand side of the axis. Since the value is discounted, it would be a stubby little bar, but not insignificant. 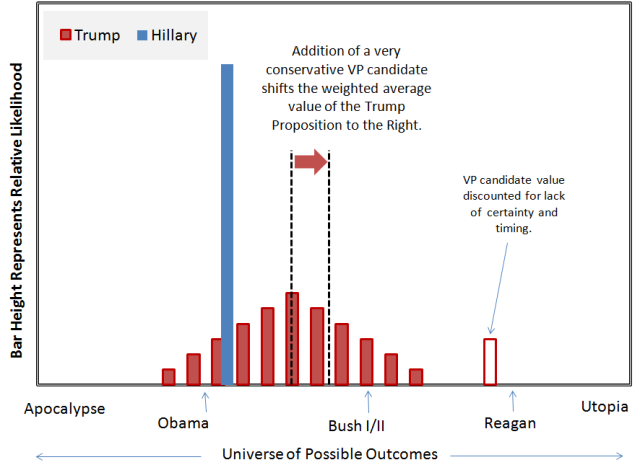 It might be enough to shift the Value Proposition — the “expected value” of a successful Trump — far enough right to represent a clear choice for Conservatives, materially better than BATNA/Hillary.

On the other hand…

A neutral/moderate VP choice changes the Value Proposition not a whit.

A bad VP choice >cough< Palin! Kasich! >cough< shifts the calculation toward the abyss, to the left, wiping out any daylight between Trump and Clinton.

Now might be a good time to review the work of Elisabeth Kübler-Ross. You know, the Five Stages of Grief:

I realized I’d begun Bargaining the night of the Indiana Primary. I can’t wait to get to Step Five.