Louisiana is disappearing! (… but not for the reasons you have been told).

Sea level rise! South Louisiana is disappearing  — an area the size of a football field disappears every 15 minutes!

Or so we’ve been told. The scapegoats range from the oil and gas industry to climate change to invasive species — feral hogs and the lowly nutria. The story fits well with environmentalist panic and the age of the Anthropocene.

Geologist Chris McLindon has studied the data, and thinks he has a better answer: faulting.

In a nutshell, the Mississippi River is a dynamic system. It drains the North American continent from the Appalachians to the Rockies, dumping a huge sediment load into the giant bowl of the Gulf of Mexico. The stress created by this load is relieved by dozens, if not hundreds, of growth faults which ring the basin. These faults penetrate the surface and some can exhibit movement on the order of 20 mm per year. Your friends in Houston (pdf link) probably know all about them. 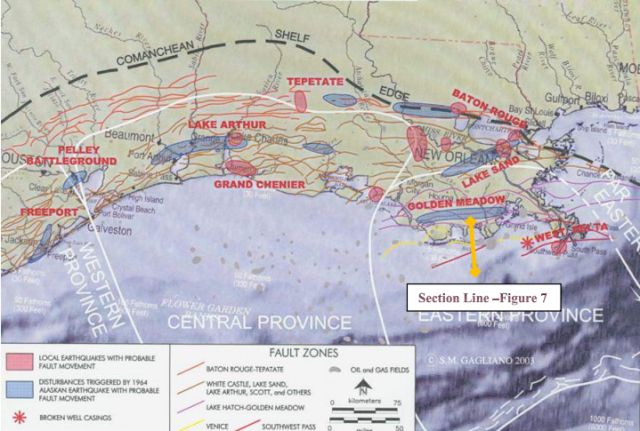 In South Louisiana, Mother Nature used to compensate for that movement. Annual flooding brought sediment-rich floodwaters to the marsh, enough to replenish and rebuild. After the 1927 flood, however, all that stopped. Flood control levees kept the current channel of the Mississippi River well within its banks (for the most part), but robbed the marsh of its natural floods. As subsidence inexorably marched on, by the 1970s much of the marsh reached sea level and was permanently lost, becoming open bays and lakes.

Our perceptions of  geologic “normal” tend to be limited by human experience. For South Louisiana, the traditional frame of reference begins in 1932 with the first regional aerial photography. But geologic processes happen over eons, causing us to reconsider our notion of “permanent”. (At 20 mm per year, fault movement can account for about 5-6 feet of local subsidence relative to sea level since 1932, enough to plunge wide swaths of natural marsh under water.)

Since the time of the Egyptian pyramids — some 5,000 years, an eye-blink in geologic terms — the Mississippi River has formed sixteen discrete delta systems, ranging as far west as the outskirts of Lafayette, where I live, some 125 miles west of New Orleans. In fact, if the river had its way, it might well have diverted down the Atchafalaya River in the Flood of 1973. Actions by the Corps of Engineers narrowly averted that event, which would have been catastrophic for New Orleans, Baton Rouge and the whole industrial corridor along the lower Mississippi. 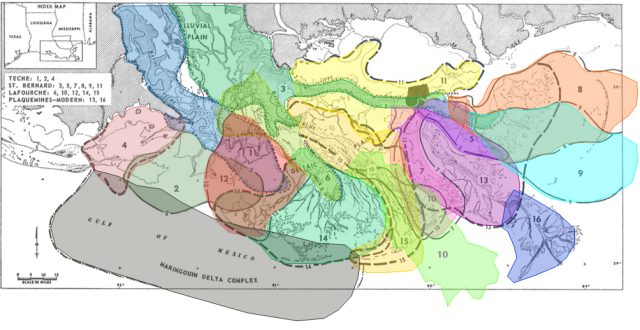 In reality, the nickname “Old Man River” mischaracterizes the dynamic system. You can get a better idea of how it behaves over geologic time by imagining the behavior of a high-pressure water hose held two feet behind the nozzle. South Louisiana as we know it may be “disappearing”, but the river is doing its best to find a new course and start rebuilding a new delta somewhere else.

Mr. McLindon has done incredible work in this area. I am lucky to have seen his presentation on two separate occasions. He continues to work through the New Orleans Geological Society to expand the research effort to graduate geologic programs in universities.

I encourage anyone interested to watch the video at this link.

2 Responses to Louisiana is disappearing! (… but not for the reasons you have been told).