Natural gas exports? What seemed impossible a mere five years ago is becoming a reality. The shale gas revolution has blessed us with burgeoning domestic supply and historically low prices for gas relative to crude oil. Cheniere Energy (ticker symbol LNG) is among a small group of American companies planning the construction of facilities to export liquified natural gas. The technology is fascinating and the economic promise is compelling.

But a political battle looms over expansion of gas exports. Sen. Ron Wyden (D-OR), the presumptive new head of the Committee on Energy and Natural Resources, has already declared his opposition to natural gas exports. There is also opposition from large industrial users of natural gas who fear rising prices for their fuel and feedstock.

Cheniere has secured permits (at a cost of $100 million) and is proceeding with plans to construct an $11 billion export facility at a site in Cameron Parish, LA. It is effectively a major expansion of Cheniere’s existing gas import facility, utilizing the existing deepwater port, gas storage facilities and pipeline interconnects. On site is a deepwater port that can accommodate Q-Flex and Q-Max tankers for export to overseas markets. (Due to Jones Act restrictions, shipments to U.S. destinations like Hawaii or Puerto Rico are not allowed; the entire world fleet of LNG tankers is foreign-flagged.)

If all goes as planned, the terminal will begin export operations in the third quarter of 2015.

When chilled to -260°F, natural gas (methane, CH4) occupies 1/600th the volume it does at 60°F, at very near atmospheric pressure, making it possible to transport LNG in ocean-going tankers. The largest tanker class, the Q-Max, is as long as an aircraft carrier and has a capacity of 260,000 cubic meters; its LNG capacity is thus 5.7 billion standard cubic feet of gas (standard conditions 60°F & 1 atm). That’s roughly 8% of one day’s domestic production, or enough gas to supply 70,000 American homes for a year.

Liquifying this quantity of gas takes tremendous power.  Each of the Sabine Terminal’s four gas liquefaction trains will be powered by six GE turbines, each the equivalent of a Boeing 747 jet engine (gas fired, of course). Cheniere’s fixed cost to liquify 1 million BTU of gas is roughly $3.00.

The technology itself is not new. The U.S. has been importing LNG by tanker for years, but in relatively small quantities. Japan imports every cubic foot of its natural gas as LNG. Cheniere’s website addresses the safety and environmental risks:

Unlike other fossil fuels, [gas] is non-carcinogenic and non-toxic. Because it is lighter than air, it dissipates quickly and has shown to pose little threat to marine life when transported. In the history of LNG oceanic transportation, there have been no incidents of containment loss. … When compared to other fossil fuels, CO2 emissions are reduced by 70 percent.

LNG fires are highly unlikely because of the extremely delicate fuel to oxygen balance necessary for combustion. The industry has, however, put in place extremely aggressive safety measures to ensure that fires are prevented and spills are contained.

There is tremendous demand for natural gas in Western Europe and Asia, where gas trades near energy parity with crude oil. The price in Japan is in excess of $14 per million BTU, vs. $3.70 in the U.S. (today’s spot price at Henry Hub).

In order to finance the $11 billion capital invesstment for this project, Cheniere has contracted with four international LNG marketers/gas utilities (one each in the UK, Spain, South Korea and India). Each has contracted for approximately one train’s gas volume for twenty years on a “take-or-pay” basis; in other words, they will pay Cheniere’s fixed cost component whether or not they actually take the gas. In addition, buyers will pay Cheniere 115% of the cost of the gas acquired on their behalf to cover fuel and operating expense. Cheniere’s South Louisiana location and access to pipelines guarantees that gas can be acquired at or near the Henry Hub price.

None of that implies that this is a risk-free venture for Cheniere. A steady LNG export market depends on a substantial gap between the price of gas in the U.S. versus foreign markets. As recently as 2004, gas traded at or near parity with oil in the U.S.; in 2001, Cheniere “bet the farm” in a transition from being an oil and gas producer to being an LNG importer. That move didn’t work out so well, to put it mildly.

So will the current price differential hold? That’s anybody’s guess, and a risk that Cheniere and its financial backers are willing to take. I am in no position to evaluate the security of their customers’ “take-or-pay” guarantees, or their judicial recourse should one or all fail, but obviously that risk is a primary concern.

Currently, the U.S. is a net importer of about 8% of our gas use, the bulk of that via pipeline from Canada. With a commitment to natural gas exports, the country could become a net exporter, helping our balance of payments to the tune of $7 billion per year. 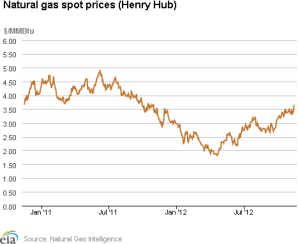 A healthy export market would stabilize prices, and thereby stabilize supply. With the natural gas prices that have prevailed over the last couple of years, few companies are intentionally exploring for gas. Much of the new gas on the market is produced as a by-product of oil. Gas at $4.50 per million BTU is still a bargain relative to oil, and is a price that would encourage more gas-directed exploration.

Construction of the $11 billion project would have a massive economic impact on Cameron Parish. One billion dollars of the total represents construction wages: employment would peak at 3,000 workers, compared to total parish population of 6,800. Between 100 and 150 permanent jobs would be created in plant operations.

Beyond the employment directly related to construction, Cheniere estimates that 30- to 50,000 skilled workers will be needed in upstream oil and gas to satisfy the additional 2 billion cubic foot per day demand created by the export market.

As mentioned above, Ron Wyden is one of the key opponents of LNG exports.

The issue hits home for Wyden. Five proposed terminals in Oregon and Washington would export coal to Asia, and the Pacific Northwest could serve as a launching point for natural gas exports as well.

Hold the phone. Export coal?! In fact, in 2011, the U.S. exported over 107 million short tons of coal to countries around the world.

Wyden and other Democrats fear the U.S. is exporting greenhouse gas emissions along with the fuel, making it harder to combat global climate change. They also want more studies on the environmental effects of the unconventional drilling methods used to tap natural gas.

On top of that, Wyden and congressional Democrats have said the U.S. might shortchange its newfound domestic energy security with increased exports. They say the sales would increase natural gas prices, undercutting the manufacturing industry’s competitive position.

This is hypocrisy of the highest order. Compared to coal, natural gas is environmentally innoccuous: no mercury, no sulfur and 30% of the carbon dioxide. Gas would likely displace coal in most markets.

Cheniere’s Sabine Terminal is fully licensed for export to both free-trade and non-free-trade countries. They would also like to secure permits for a second export terminal in Corpus Christi, TX. Competitors Freeport LNG and Sempra LNG also have export plans, but other than Sabine, none of these plants is licensed at this time.

As always, natural gas is clean, abundant and American. It’s up to us to use this resource wisely.

2 Responses to LNG and Natural Gas Exports: A Primer