Post-Mortem for the Ethanol Tax Credit

A couple of weeks back, my boss asked a question that I could not immediately answer:

The ethanol tax credit expired on December 31. The price of ethanol should have gone up afterward. Did it? How much has that affected the price of gasoline?

I turned to my friends at the American Petroleum Institute for help. Their surprising answer, in part: 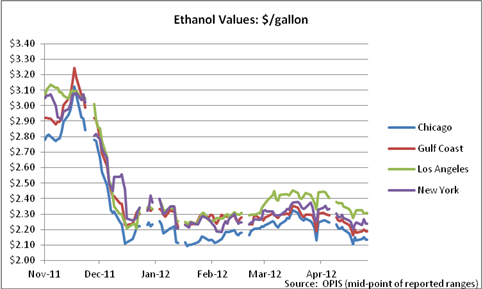 API declined to answer whether the expiration of the credit has affected gas prices.

A little research helped make sense of this counter-intuitive set of facts, and sheds light on the efficacy of the government’s forays into the marketplace.

The website www.ethanol.org provides some insight on the particular credit that expired:

Commonly referred to as the “blender’s credit,” the Volumetric Ethanol Excise Tax Credit (VEETC) was created in 2004 [to provide] oil companies [i.e., refiners — Ed.] with an economic incentive to blend ethanol with gasoline. As of January 1, 2009, the original tax credit totaling 51 cents per gallon on pure ethanol (5.1 cents per gallon for E10, and 42 cents per gallon on E85) was reduced to 45 cents per gallon. The tax credit is passed on to motorists in the form of more cost-effective fuel at the pump. VEETC is currently authorized through December 31, 2010. [Ended 12/31/2011. Emphasis mine. Ed.]

The oil refiners that blend 10% ethanol into motor gasoline received a 45¢ credit — a direct dollar-for-dollar reduction in their tax bill — for every gallon of ethanol they used.

When that credit was taken away, the price of ethanol collapsed by 60 to 70¢/gallon, and stabilized.

The cost of ethanol is a fully-deductible business expense for the refiner, so he could pay more than the amount of the credit for a gallon of ethanol and still be money ahead. In other words, the refiner got the credit and an incremental deduction.

Congressional mandates are still in place for ethanol usage, so the corn growers and ethanol producers have a market that’s not going anywhere.

Along with the blender’s credit was a corresponding tariff on imported ethanol also expired.

Here’s what an editorial at www.agriculture.com had to say back in December:

In June, the U.S. Senate voted to end the ethanol blenders’ tax credit, a move decried by some ag groups and shrugged off by others.

Now, that tax credit, formally known as the Volumetric Ethanol Excise Tax Credit (VEETC) is slated to end with the end of calendar year 2011. With it will go the 54-cent-per-gallon tariff on imported ethanol. Ethanol industry groups were understandably upset with the decision, while cattle industry groups, namely the National Cattlemens Beef Association (NCBA) called it a “giant step toward leveling the playing field for a bushel of corn.” [The blender’s credit created distorted economics in the corn market, which increased the cost of feed corn to the cattlemen, and the cost of food in general. – Ed.]

…”I don’t think we’ll lose much corn demand because there is still a minimum amount that we have to blend. In essence, the demand level is the law of the land,” Penner says….The credit was originally implemented as a way to encourage the construction of ethanol production and infrastructure, says Chris Thorne of Growth Energy, a renewable fuels industry association. That goal’s been accomplished, …

“There’s still going to be demand for ethanol in the U.S. We’re still in a position where we’re exporting to Europe and Brazil,” Thorne says. …

“We’ve seen a break in margins lately, but overall I think the ethanol industry will survive just fine in 2012,” Penner says. “What we’ll see is pure economics come into the equation.”

Pure economics? That’s hardly the case, with a government-mandated ethanol blend in gasoline.

Purely based on the decline of ethanol, the price of a gallon of 10% ethanol gasoline should have declined by 4.5 to 7¢. My suspicion is that the reduction in the cost of feedstock has merely increased the refiners’ margins, and has not been expressed in the pump price. Granted, it would be hard to detect a 1-2% movement in price given all the other factors that influence it.

Personally, I don’t begrudge the refiners. It’s always been the low-margin end of the business.

But remember these words the next time our Congress sets out to tinker with the markets:

The tax credit is passed on to motorists in the form of more cost-effective fuel at the pump.

Yeah, sure. And I’ve got a bridge to sell you.