What Peak Oilers Won’t Tell You About Peak Oil

M. King Hubbert is the father of Peak Oil theory. In a 1956, he paper correctly called the timing of the peak in U.S. crude oil production in the early 1970s.

Neo-Malthusians and Progressives make sure you know about Hubbert’s pessimistic outlook for conventional crude oil. They made Hubbert a household name, the only oil technologist whose name they use without adding “sellout” or “whore”.

1. The name of the paper is “Nuclear Energy and the Fossil Fuels” (.pdf link)

…Fig. 30 … covers the time span from 5,000 years ago — the dawn of recorded history — to 5,000 years in the future. On such a time scale the discovery, exploitation and exhaustion of the fossil fuels will be seen to be an ephemeral event in the span of recorded history. There is promise, however, provided mankind can solve its international problems and not destroy itself with nuclear weapons, and provided the world population (which is now expanding at such a rate as to double in less than a century) can somehow be brought under control, that we may at last have found an energy supply adequate for our needs for at least the next few centuries of the “foreseeable future.”

Hubbert arrived at this conclusion after cataloging the uranium potential in the United States. Much of that potential exists in widespread shale deposits in various parts of the nation.

Hubbert’s vision of the future may have become reality in France. He must have been disappointed to see what a bunch of hysterical twits the American environmentalist movement can be when they derailed American nuclear development after Three Mile Island/The China Syndrome. 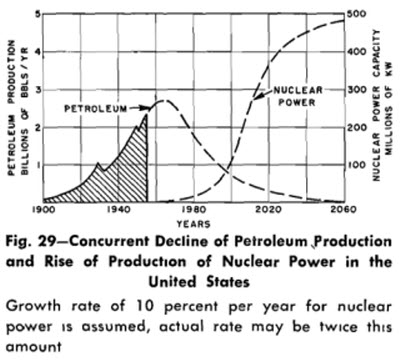 (Oil shales are massive kerogen-rich formations which are found in the Mountain West, primarily western Colorado. Kerogen is a waxy, immature oil precursor, not to be confused with conventional oil in the Bakken shale of North Dakota and elsewhere.)

Ironically, Hubbert foresaw the potential energy locked up in the shales in the form kerogen and fissionable materials, but did not appreciate the potential of shale as a source of natural gas. Shales currently supply 40+% of our gas.

More on that topic in a future blog.