In 1956, Shell geologist M. King Hubbert correctly predicted that oil production in the United States would reach a peak around 1970. Since his Peak Oil theory fits so well with the Malthusian worldview of “Progressives”, anti-capitalists and anarchists, Hubbert has become a posthumous hero to the Left, an unusual role for a scientist polluted by the filthy lucre of the oil industry. 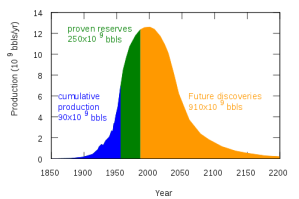 Peak Oil’s fundamental assumption is that the supply of oil is finite and fixed. The peak of the oil production curve is reached when half of the total resource base has been produced, so rate vs time exhibits a symmetric bell-shaped curve. Post peak, rate declines rapidly. Hubbert demonstrated a peak for oil production in Texas, and he extended his theory to correctly predict the time (but not the rate) of the peak for the U.S. World oil production is supposed to have peaked in the last five years or so.

But Daniel Yergin, chairman of IHS Cambridge Energy Research Associates and a Pulitzer Prize-winning author, argues in a WSJ.com Saturday Essay that Peak Oil theory has a fatal flaw, which is rooted in Hubbert’s blind spot: economics. (H/T to Mark J. Perry and his excellent Carpe Diem blog.)

Hubbert was imaginative and innovative,” recalled Peter Rose, who was Hubbert’s boss at the U.S. Geological Survey. But he had “no concept of technological change, economics or how new resource plays evolve. It was a very static view of the world.” Hubbert also assumed that there could be an accurate estimate of ultimately recoverable resources, when in fact it is a constantly moving target.

Hubbert insisted that price didn’t matter. Economics – the forces of supply and demand – were, he maintained, irrelevant to the finite physical cache of oil in the earth. But why would price—with all the messages that it sends to people about allocating resources and developing new technologies—apply in so many other realms but not in oil and gas production? Activity goes up when prices go up; activity goes down when prices go down. Higher prices stimulate innovation and encourage people to figure out ingenious new ways to increase supply.

The idea of “proved reserves” of oil isn’t just a physical concept, accounting for a fixed amount in the “storehouse.” It’s also an economic concept: how much can be recovered at prevailing prices. And it’s a technological concept, because advances in technology take resources that were not physically accessible and turn them into recoverable reserves.

[The emphasis is not in the original, but comes from Perry’s quote of Yergin’s text. – Ed.]

This is true on all counts. Hubbert’s forecasts were made when the U.S. was the world’s dominate oil producer, in an environment of price stability. Until the Arab Oil Embargo in 1973, oil prices were below $20 per barrel (2008 dollars), and declining in real terms.

Rising prices undeniably add reserves. On a micro level, rising prices mean that a well that might be plugged making 5 barrels per day may produce profitably for several more years. Old abandoned wells may even be returned to production. A new prospect that is uneconomic at $40 per barrel may be drilled if prices reach $80.

At a macro level, higher prices extend the search for oil into areas that Hubbert never imagined.  Hubbert’s original U.S. projection included no Arctic reserves, as Alaska was not a state when his forecast was made. I’m certain that Hubbert never envisioned drilling in offshore waters over a mile deep, or production from then-worthless shales like the Bakken of North Dakota.

One other point worth mentioning: Hubbert’s work was derived from the “hard-rock” mining industry, which searches for minerals such as gold, silver and platinum. A key difference between these precious metal resources and hydrocarbons. Au, Ag and Pt are elements; they occupy boxes on the Periodic Table.

Unlike elements, natural gas and oil can be created from other substances by alchemy (or, really, by chemical engineering). Gas and liquids can be manufactured from related compounds found in nature, such as coal, tar sands or kerogen. Economics also control the degree to which these technologies expand the effective oil and gas resource base.

Oil resources are not infinite, and it is unarguable that most of the easily accessed, conventionally producible oil has already been discovered. I agree with Yergin’s conclusion, that rather than “Peak Oil” we may be entering a period of “Plateau Oil”. Instead of a symmetric bell-shaped curve, we are on a limb of the curve that flatten or grow slowly for some time. Reserves will be added at the economic frontier, where the search for reserves is justified whenever the marginal cost of finding and developing is less than the current market price. Ultimately, if we let free market forces dictate, new technologies will replace hydrocarbons at such time as they achieve a lower price in the marketplace.

Or, in a more likely scenario, politicians will muck up the whole thing, thinking they will be the first beings in the history of the planet to outsmart the law of supply and demand.