Larger image below the fold.

The Obama Administration continues to play bureaucratic hacky-sack with what could be a key element of our nation’s secure energy future: the Keystone XL pipeline project. The new line would increase the export capacity of the Keystone Pipeline (placed in service 2008) by 700,000 barrels of Canadian oil-sands oil per day. The expansion would also facilitate the domestic movement of crude from the key storage hub at Cushing, OK to the large refinery complexes on the Gulf Coast.

Keystone owner TransCanada is willing to take on this massive construction project on its own dime (or rather, its own $7 billion). It needs permission from the U.S. EPA and the State Department, which has jurisdiction due to the international scope of the project. The pipeline should have been under construction by now, were it not for Administration foot-dragging.

Opponents of the Keystone XL project might think they’re saving the environment by blocking the line. Not so. 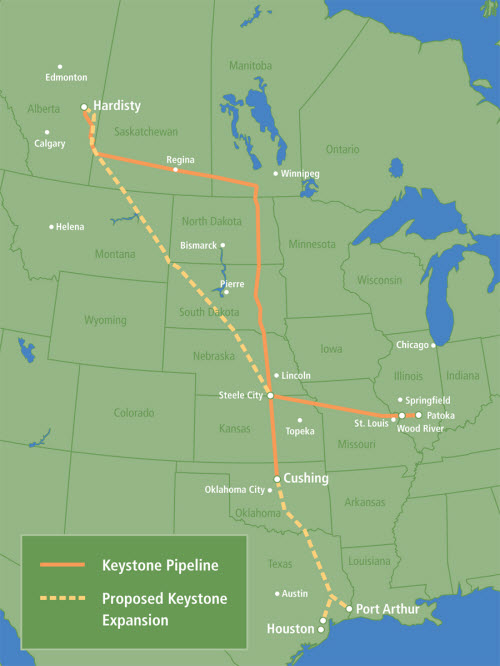 An independent study finds that construction of the Keystone Gulf Coast Expansion Pipeline project should provide significant, positive contributions to U.S. energy security and the U.S. economy valued at over $20 billion. The Perryman Group study [pdf link] states that the proposed pipeline project should improve U.S. energy security with the ongoing benefit to the U.S. economy of a more stable source of consistent energy supply over an extended period of time.

The study further concluded that once the pipeline is operational, the states along the pipeline route are expected to receive an additional $5.2 billion in property taxes during the estimated operating life of the pipeline. The $7 billion pipeline project is expected to directly create more than 20,000 high-wage manufacturing jobs and construction jobs in 2011-2012 across the U.S., stimulating significant additional economic activity.

Much as they’d like to, American bureaucrats are powerless to prevent the development of Canadian oil. If we don’t want the oil, the Chinese will.

In a letter to the State Department, the EPA said it remains concerned about the risk of oil spills that could affect drinking water and sensitive ecosystems, as well as the effect of greenhouse gas emissions associated with the $7 billion Keystone XL pipeline.

The EPA said that despite two lengthy reports, the State Department still has not done sufficient analysis of the project’s impact on the environment. The letter urged State to conduct a more thorough analysis of oil spill risks and alternative pipeline routes. …

The American Petroleum Institute, the oil’s industry top lobbying group, said Keystone XL would create thousands of jobs and prevent China and other nations from tapping into the vast resources of the Alberta tar sands.

“Other nations will aggressively develop this key strategic resource for their future energy needs if we fail to act,” API chief executive officer Jack Gerard said in a letter to [Secretary of State Hillary] Clinton. [Source.]

Canada is our largest trading partner and our #1 source of oil imports. From a political and practical standpoint, Canadian oil supply is as secure (or in the case of Gulf of Mexico offshore production, more secure) than U.S. domestic production. That’s why I’ve always favored the term energy security over energy independence.

The Keystone XL expansion, even though it would be owned by TransCanada, would also enhance the transportation infrastructure for domestic oil. A group called BakkenLink Pipeline LLC had plans to run a pipeline from the fast-growing North Dakota oilfields to tie in to the Keystone XL in Montana.

But last week, BakkenLink Pipeline LLC announced it would scale back its project by nearly half. Instead of collecting crude in the North Dakota oil patch and moving that oil 250 miles to link up with TransCanada Corp.’s proposed Keystone XL Pipeline, the company only intends to lay 144 miles of pipe and its end point will be a rail-loading station near Fryburg, about 30 miles west of Dickinson. …

The State Department is putting pressure on TransCanada to add safety standards to its proposal that go “beyond those required by law.” …

Time and time again, issues at the federal level — lack of a national energy policy, changing standards at the Environmental Protection Agency, delays in project approval — have hurt energy development in North Dakota. For political reasons, the federal government has been paralyzed when it comes to choosing an energy future for the nation and, as a result, North Dakota pays the price.

It’s not just North Dakota that pays the price. Better access for Bakken production to the national pipeline and refining network would help all consumers.

The House of Representatives passed a bill in late July that, if approved by the Senate and signed into law by the President, would require the Administration to act upon TransCanada’s permit application by November 1. Ain’t gonna happen. 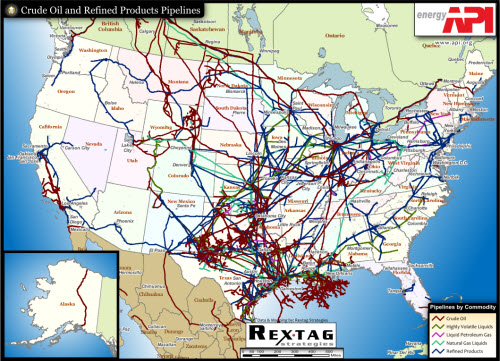 Anyone looking for a substantive difference between Republicans and Democrats need look no further than energy policy. Republicans tend to be pro-development and sensitive to the nation’s energy security. With rare exception, Democrats in Washington are ignorant of our true energy needs, and are subservient to organized environmentalists, a true 21st Century Luddite movement.